In a Mark Manson AMA posted on Reddit a few years ago, two points stood out to me. Paraphrasing:

“One healthy relationship teaches more than 1000 cold approaches [walking up to random women and introducing yourself in the hopes of getting to know/date her] or 100 lays [sex with a girl, usually noted for casual encounters].”

“Getting into a relationship with an emotionally healthy woman can be one of the most healing experiences of your life and does not get enough credit in this [the PUA/MDA] community.”

When I first read this I said “Pfttt, fuck that, more girls is always better.”

A year later I said, “Oh yes, I can see how that might be the case.”

Now after expiriencing it I say, “Right fucking dead on.”

In this article, I will use myself as an example. I will talk about the beliefs and thoughts on women I had before and how they changed after dating someone who I consider extremely emotionally healthy and supportive. The article is not arguing that getting a girlfriend (or boyfriend, as this topic applies to women too) is the right thing to do and that fucking tons of people is bad. But it will make the case that consciously choosing to having a serious relationship, whether monogamous or polyamorous, can help solve a lot of your emotional hang ups and point out some of the benefits you can get.

Is It Better To Be Single, Or Have A Girlfriend or Boyfriend?

This is especially apparent for men in the pick-up artist (PUA) and men’s dating advice (MDA) communities. Telling a guy he can learn how to bring a girl home is going to garner more attention from him rather than saying he can get a girlfriend. Sex sells, connection doesn’t.

Having multiple sex partners throughout life is part of experimentation, exploration, and finding out what you like and don’t like. It’s perfectly healthy.

But what happens when you feel like you always need more and more? There’s an inherent unhealthy drive. It’s not “Oh I always want to meet new people”, it’s “I’m not good enough and I don’t feel loved unless I keep banging girls”.

Perhaps a different perspective is needed. Maybe it’s not quantity that should be chased.

Why Should You Care About Having A Healthy Relationship?

Many relationships are dysfunctional. Unfortunately it is a numbers game – It takes time and a different number of people to find who is good for you and what constitutes “healthy”, just like finding a good job, a good city to live in and so on. You need some bad or not so great to show you the good as a means of comparison. But once you find a good relationship, you will have a high standard for the future. You will know what proper boundaries are, you don’t blame the other person for your feelings (and don’t accept blame either), you learn to connect and empathize, and more. 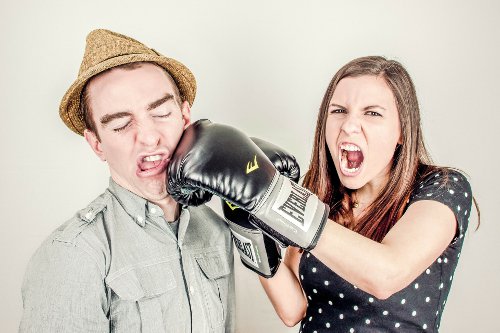 Always good to settle fights this way in a healthy relationship.

Beliefs and Experiences Prior To My Relationship

My first experiences with women prior to my most recent relationship didn’t seem that great. I had two girlfriends in high school that were suicidal, and a Mom who vented a lot of her issues to me. These beliefs came to fall into place:

Once I started dating women (after 5+ years of ignoring my desires for fears of intimacy and being an avoider), I still had a great deal of issues abound:

Over the years, through therapy, and pure exposure this has all gotten A LOT better. I mean, I actually started to go on dates with girls which was a huge improvement over rationalizing my desires for connection with the opposite sex away.

But my last relationship really shook my ground.

While meeting in a bar randomly and going home together is a weird way to start a more serious relationship, that’s what happened. At first my thoughts were “This girl is really cool, nerdy, sweet, and sexy. I want to fuck her again and hang out, it feels good.”

But then it started to feel REALLY good. The sex got better. The connection got better. Nothing was needed except just us two. We were perfectly happy just lying next to each other.

But it was our emotional maps (similar needs in child hood missing, or similar past experiences) that really drew us together. We both suffered from anxiety, had abandonment issues, and thought the same way.

I didn’t realize how much I loved the girl until looking back after a month. She had hooked me, and I had no idea how.

Beliefs And Results After My Relationship

This was also not a one-sided deal. As I was helped with a lot of my issues, I made a point to always re-assure the girl how much I loved her for who she was, and that she didn’t need to change, which was 100% the truth. I also tried to help her through any anxious thoughts she had, and get her to open up about herself. She also said she grew a lot as a person.

While I still go back and forth between my old beliefs and new, the point is I’m in a much more positive headspace when it comes to women because of this relationship, and I am eternally grateful for it. It gives me motivation to keep on finding cool girls, and to write articles like these, so hopefully other people can see the deeper reasons why relationships can be extremely healing.

Again, this does not mean that fucking tons of people is bad, or that you NEED to be in a relationship. Just make a conscious choice, and take in this information knowing that a healthy relationship can REALLY help you in the future to have even better times with the opposite sex, and with your life in general.

You want to go on dates, but here’s the problem…

Your mind is screwing you over.

You get really bad chest tightness from anxiety. You worry about how to go in for the kiss. You don’t know how to deal with the fears of being rejected, judged, or looking silly.

This is NORMAL, but if it’s getting in the way of your life it’s not fair.

Dating doesn’t have to be some complicated chore that seems like you’re executing a tactical plan.

It can be fun, enjoyable, and you can end up with an amazing person.