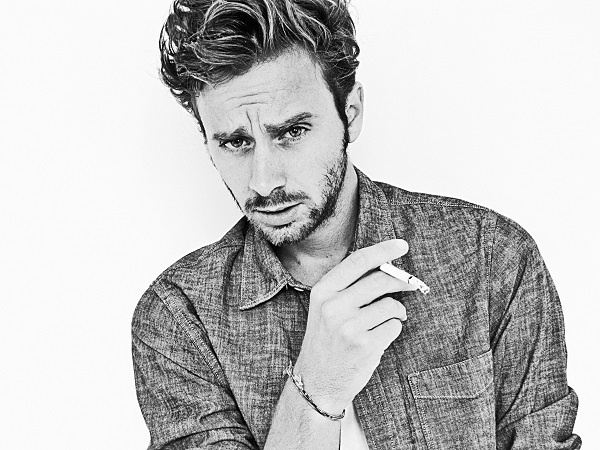 You may have read articles about how if you are a “21st century woman”, you should approach men when playing in the dating realm… But, perhaps no one has ever clearly explained to you WHY women should approach men (instead of men just approaching you), or how you can actually start a conversation with a man you are in interested in. As well, how do you get over that initial fear of being labelled as “weird” for approaching a man you are romantically interested in? I mean, 99.9999999% of the time GUYS do that, right?

But he’s got a tight pair of buns and you want to squeeze ‘em.

This article aims to address these issues… err, well except the bun squeezing thing, go nuts on that. Here, I provide:

Excuses And Fears For Not Approaching Men

I stood shoulder to shoulder in a crowded Tapas bar in Madrid with a few new friends and some old. I got into a discussion with Sarah, Sophie, and a cute girl from the Netherlands.

“Let me ask you, what happens if you see a cute guy? Do you ever go up to him?”

“No way. Usually I’ll just stare at him, or smile.”

“Or we move closer, you have to be able to read the signs.”

“Oh well, then I guess I never get to meet him.”

“Have you ever actually considered going up to HIM?”

“No way, it’s guys that usually do that!”

“Yeah and besides what if he rejects me?”

Women you are beautiful. Really, you are. You aren’t perfect, but I love you. But for all the talk of equality, here’s something that I think we, as a society, are still pretty far behind in. Women won the right to vote, the right to be able to obtain prescription birth control to explore their sexuality with several partners without the worry of becoming pregnant…

Still, you are usually not the ones initiating a romantic interaction or conversation. Why? You definitely have all the intellect, social know-how, and ability to.

Honestly at this point… I think you’re all just scared and hiding behind excuses like “guys do the approaching”.

Now don’t get me wrong, I’m not saying you’re bad for it or that there’s something wrong with you. Trust me, and all men every where, we KNOW about approach anxiety (AA) as intimately as sleeping to it next in bed. In fact, most male dating advice, pick-up material, and the like FOCUSES a great deal on AA because once you can walk up to people, it’s just a matter of time before you click well with someone.

It can be scary.

But most excuses are just a means of feigning apathy for something you really care a great deal about. You want to go after the guys you see, it’s time to stop lying to yourself.

Perhaps some of these excuses sound familiar?

Yes you do, you’ve been staring at him for over an hour. You’re scared. So what? Are you going to let fear hold you back from doing what you want? What if the guy you’re looking at is the guy you might marry? An amazing guy. If guys that become paralyzed when talking to women can get over their fears slowly but surely, so can you.

“It’s not normal, guys usually come up to girls”

Again, so what? Be different. Be memorable.

I only started approaching women a few years ago. In that time, I can’t remember any woman that directly came up to me and said that they wanted to meet me. Trust me if and when that hopefully does happen, I will remember that woman forever.

Most guys are oblivious to your “signals”. And in fact, even if they know them, they can get annoying. Yes you’ve been staring at me, great. That doesn’t mean I’ll come over there. Some of us understand:

means “talk to me”, but some men don’t. You’re taking a HUGE risk being passive versus just going after what you want.

“I’m scared of being rejected”

Ahhh, that’s more to the core. Aren’t we all.

Don’t think of it as rejection. Remove the word rejection from your vocabulary.

Think of it as “low interest”. The guy wasn’t that interested, you didn’t click. With so many different people in the world, do you honestly think that everyone can like each other that much? We’re all so different that it’s impossible.

I promise that even if a guy isn’t interested, you’ll live, and there will be a guy eventually who is.

Why Bother Getting Over My Fears Of Approaching Men?

“Fine whatever about the excuses. Why should I bother going up to guys?”, I hear you say. “What good would being able to approach men do for me? It’s easier just to let them come to me.”

I’m glad that you asked.

The main thing is CHOICE. Many women complain that there are no good men out there. Women are, usually, limited to the guys that approach them. Why don’t you level the playing field and increase your chances of finding a great guy? Think about it – the ability to walk up to ANY guy YOU want. No more waiting. No more being limited to who comes up to you. Doesn’t that sound empowering?

Now I didn’t say that EVERY guy you talk to will like you. In fact, a lot of times you will find that you two don’t get along. Again, not everyone will like you. There will be a lot of low interest. But personally, I’d rather be taking action trying to find amazing people to spend my time with compared to sulking, waiting, or doing nothing.

It’s time to stop being passive.

It’s time for you to get over this stigma of “guys always do the approaching”.

It’s time for you to go find the great guys out there.

Let me try and help you as best I can. Here’s my 3 step process:

1. If you can’t talk to anyone, use progressive desensitization

One of the first articles I wrote on Light Way of Thinking discussed AA in general, but it was mostly geared towards men. However, I discussed a ladder method at the end of the writing to work up to approaching someone directly stating that they are attractive.

If you are nervous in general about talking to someone new, that’s OK. It just means that we need to start you off with something easier and then work your way up. Go check out the original AA article if you are nervous about approaching anyone in general, or think you need some help with social anxiety.

Once you can walk up to someone, we can move on to how to directly approach men:

2. When you walk up, acknowledge that what you are doing is different compared to the norm

Humans sense social norms and cues very well. If they are broken, we become extremely uncomfortable. While some men may be open minded and not care, others might get a bit weirded out if you come up to them. You can validate these social norms but acknowledging the fact that what you are doing is a bit different. So:

3. Here’s what to say to that hot guy

“Hi, my name is Jen. I know most girls don’t do this and this is a bit different, but I saw you and think you are attractive. I wanted to meet you.”

Anything like this would be fine. Change it to suit your personality and style of talking but in short:

If a guy makes fun of you for coming up, maybe you don’t want someone who isn’t open to you expressing yourself truthfully. Or, maybe it’s better to find someone else who doesn’t become uncomfortable in his masculinity for getting approached because he thinks “it’s the guy’s job”.

And if he is OK with it but you guys don’t click, don’t sweat it… another guy will be around the corner.

And here’s the HUGE kicker for women who get over AA. As guys, women HARDLY ever approach us. But women who go to bars may get approached 10 to 20 times a night. Imagine if YOU start approaching, now you’re REALLY upping your odds of meeting an awesome guy.

Now that I think about it, I’d actually kind of jealous of any woman who gets over AA!

I don’t know, but for a bit of work getting over your fears, this sounds like a pretty good deal to me.

Now don’t get me wrong, I firmly believe in masculine and feminine energies. I think that the guy should be the one who leads the interaction, because that’s what masculine energy does – lead and direct. But, that doesn’t mean you, women, can’t give that energy a little nudge.

Once you approach him, he’s got to take the reigns and start leading things where they need to go.

Again, we want synergistic dating. We want to be working together. No more games.

Bring on the New Wave of Dating.

Oh and also, bring on the women approaching me and all the other guys out there.

We’re waiting for you.