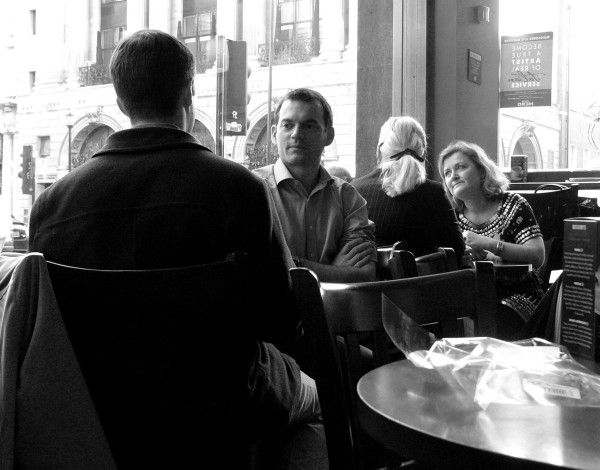 In beginning to read Brené Brown’s book Daring Greatly, I can already tell I’m going to put it in my top reads. The centric focus is the concept of vulnerability and how it is the true measure of the courage a person has. By vulnerability, Brown means expressing yourself without a filter as you truly desire, whether positive or negative, to a person or with regards to something that you are doing, and letting go of all forms of shame or possible stifling/silencing mechanisms. It never struck me until some experiences this weekend of how much this can be engrained into our lives.

Before you read the rest of the article, ask yourself if you believe that you are saying what you really feel most of the time during your life. When you are upset with someone do you say it? When someone asks you if you are sad, do you cover up and lie?

Got your response? You’ll answer it again at the end of this article as well. The comparison is important after you’ve read about what it means to practice what I would call authentic expression and communication.

What Falls Under the Umbrella of Authentic Expression and Communication?

To give a context, here are a few examples:

How do others seem to be able to accomplish these feats of strength easier than us?

The specific incident I found this week was in meeting a new group of people. I have social anxiety, but have gotten much better at meeting others. However this time for some reason, it was particularly bad. It brought back memories of child hood, not fitting in, and resorting to two of my old favourite defences – isolation by silence and internalization. Why did this happen? Because I cared more about what these people thought about me than what I thought about myself in asking questions, finding out who they are, and exploring them as people. When you care more about what others think than what you think, your life becomes a reflection of what others think you should become… This can only lead to anger, depression, and an unhappy life as you try to please multiple people.

Think of this as a scale:

One on side, the more you value what others think, the more you’ll change for them, be scared to openly communicate and express yourself, and take more risks. You will also require validation back and if you don’t get it, you will feel intense anger towards the other person.

Vulnerability and the Associated Risks

What risks am I referring to?

Well in those authentic expression examples I mentioned, there are two commonalities between them:

1. They involve another party
2. You have no idea how this other party will react

They could be empathetic, enthusiastic, and return your courage. Or, they may think you are insecure, weird, idiotic, etc. If you value your wants, needs, and desires more though, you’ll be much happier in having done so, no matter what the consequences.

But it figures why you are so scared.

The Price of Inauthenticity

What not just stay silent and express when it’s safe? i.e. only say things when we are CERTAIN of the outcome?

Brown points out how vulnerability is EXTREMELY attractive to all of us when we see it in others. We love hearing true thoughts and stories with no filters, but we are deathly afraid of doing it ourselves.

Imagine if you never took a chance and said things that might be taken the wrong way or not have a favourable outcome. You’d probably never approach someone you think is attractive, never apply to school or a job, and never try anything new.

Some of My Own Personal Expiriences and Pains

I mentioned in the beginning of the article that the inspiration for this writing came from meeting new people this weekend. It was only under different circumstances later on that I started to see my newer, more confident self I have built in the past few years. I didn’t really care what the other people thought, I just wanted to say what I liked about them and connect with them. I still remember that some of the answers I got to the deeper questions I asked surprised me, and that most of my fears were contained within my own mind. Even small compliments were taken very positively, and it showed me how much fear is still inside.

I also realized the power of vulnerability with looking at my last relationship. In the past, I never shared any emotions whatsoever and the relationships were one-sided: I was too afraid of being thought of as weak, overly-emotional, or saying something wrong. There were too many of the other person’s needs to ever consider mine. Other influences added on to this which I am still sorting through. It was only in the last relationship when I began to explore my emotions and said what I liked and didn’t like, but I still felt those huge pulls to value what the other party thought more than what I thought. I also know now that even in expressing what I loved about the woman when we were together, I only realized the true extent of the other things when she was gone, and I wish I had been a lot more open without fear of “saying too much”.

We are all still scared little kids. I do not believe that adults are truly adults. In fact if you think about it, sometimes kids behave more like “adults” than actual adults.

Most young kids have no ego built up, no defences to use… They just play and say whatever they want, which can lead to awkward situations or accidents, whereby the kids receive instructions on “how to behave” that carry on into childhood. THEN they are no longer kids.

But before this, there are no rules.

What this weekend has shown me is how much we all fear saying what we truly think. How much is too much? When do we say X? What if the feelings aren’t returned? What if something goes bad?

See how the authenticity relates to courage?

The answer is simple yet incredibly difficult: be more vulnerable, and communicate more authentically. Be straight and to the point, and say what’s on your mind. If the other party is good natured, they will understand and love what you say, even if it may be hurtful. If not, perhaps you’ve found a connection you need to cut, especially if they try and shame you or make you feel bad for being who you are.

Authentic expression doesn’t have to involves large gestures like “I love you”, though. Ever notice how we get scared sometimes just wanting to make a random comment to a stranger? You can gradually desensitize yourself by first blurting out “Good morning” while waiting at the elevator, then keeping on by upping the ante with emotions and frustrations with others.

Of course you do need to have some sense of how fast you go into things. If you express deep insecurities to someone you have met once that’s probably pushing it. As well, you need calibrate – you can’t say anything you want to at any time (such as “THIS SUCKS!” during a long, boring meeting… though we all want to). This, for all of us, is part of the painful, learning process of being authentic.

You don’t know when those around you will leave or do something bad, but it’s sure better to say whatever you have to then ask “what if?” for your entire life.

As you communicate more authentically and say what’s on your mind, you drill in to your beliefs the fact that “you are OK”, no matter what feelings, thoughts, emotions, arguments, problems, challenges, and so on that you have. You become stronger again, and again. You care less about what people think, and are happier saying what you want rather than hoping for a good reaction.

Now, after reading this article answer the question again: Do you believe that you are saying what you really feel most of the time during your life? Post your before and after thoughts in the comments below, I’d be interested to know what you think!

Get rid of the fears of expressing yourself once and for all.

How many times have you wanted to say something, got nervous or scared, then kicked yourself later with regret thinking, “Why didn’t I say that? Why do I keep backing down? I suck.”

Being vulnerable and communicating authentically takes A LOT of courage and you’ve probably experienced these issues: