Many things are synonymous with backpacking – hunchbacks struggling with 30 pound loads, few clothes and not enough showers, and a thirst for adventure. Oh, and alcohol of course…

But the one other thing that travelling seems to bring about is amazing people. I have found that backpackers, or travellers in general, are usually open-minded, friendly, and warm. It’s great, and you feel so comfortable talking about anything. There’s a sense of openness and ease present I just don’t feel back in “normal society”.

The problem is that these travellers disappear after a few days… or even hours.

Inherently, travellers are transient. Unless they are working somewhere or on a longer term vacation, they will eventually leave. For backpackers this often happens within just a few days. You build super charged relationships and do amazing things together: seeing beautiful sights for the first time, drinking, laughing, joking…

And then, they’re gone.

But with so many travellers coming and going, can you really keep everyone in your mind? A person can usually only sustain up to 150 relationships at a time (Dunbar’s Number). So with all of your friends and family back home, not to mention your acquaintances… how well can you really hold on to these newly made connections?

Having only so much time to build bonds, conversations become quite similar. Where are you going, why, what are you doing when you go back, where are you from… And maybe if you become closer friends, perhaps several deeper topics. But it’s all so impermanent that at times it can be depressing.

The mind says “I want this to last forever. I love these people.” It craves for continuation.

In Paris, I could have stayed in my hostel all day with all the amazing people I met. Sometimes I didn’t even want to go outside sometimes because of the people there.

I’ve met girls from Slovenia who, after finishing law school, wanted to do something else with their lives. Wine makers from Sweden and Denmark. Graduate students from Germany. And fellow Canadian guys with a zest for partying… and sleeping in until 1PM.

And if travelling alone, such relationships form faster yet hurt more when broken off since, again, you are left with nothing but the phantoms of the memories.

The Choice In Relationships – Are They Worth It If They’ll Just End?

Your choice as a traveller is as such: to avoid such relationships and reside to talking to those we know from back home, curling yourself up and not being open to anyone because, well, what’s the point? People will leave anyways.

But Buddhism teaches that everything in life is impermanent. Even your close friends back home will one day pass away, and the relationships will end. You could argue that there’s no point in relationships at all since they all begin to wash away… But human beings are wired for connection. We need it. We thrive on it. Travel may accelerate the time of relationships, but the pessimistic view of relationships not being worthwhile closes us off to some of the best things in life.

It is only in the context of others that miracles can happen.

You struggled through University with classmates. You lost your virginity to another person. You were born by the decision of two people to have a child.

It doesn’t mean that together, for however much time we have, we can’t create something amazing for one another.

For the memories of what I’ve done in my life so far seem to burn brightest when I have done them with others. 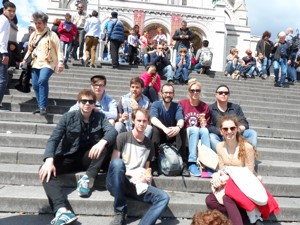 Me and some of the backpackers I met in Paris.